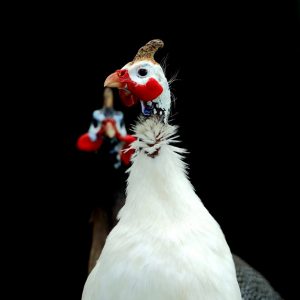 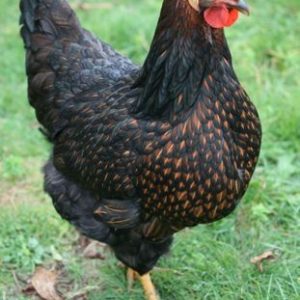 Giant White Turkeys are broad-breasted birds and are very popular because of their size and white, easy-to-dress feathering. Our Nicholas strain hens reach 25 pounds, and the toms as much as 45 pounds.

They are yellowish brown (dirty yellow) as babies, then turn white.

Raise Giant White Turkeys for your own Thanksgiving dinner, or to sell. These birds are known for their fast growth, good livability, and great feed conversion.

The Broad Breasted White is commercially the most widely used breed of domesticated turkey. These birds have shorter breast bones and larger breasts, sometimes rendering them unable to breed without human assistance (typically via artificial insemination). They produce more breast meat and their pin feathers are less visible when the carcass is dressed due to their white color. These properties have made the breed popular in commercial turkey production but enthusiasts of slow food argue that the development of this breed and the methods in commercial turkey production have come at a cost of less flavor.

These birds are grown in large, fully automated grow-out barns, which may house as many as 10,000 birds. The growing process for these birds has been so well refined, the birds often grow to larger than 40 lbs. Average birds are typically 38-40 lbs. Because of their size, they are flightless and prone to health problems associated with being overweight (due to excess muscle), such as heart disease, respiratory failure and joint damage; even if such turkeys are spared from slaughter (such as those involved in the annual turkey pardons), they usually have short lives as a result.  Broad Breasted Whites also have a very high percentage of their eggs hatch, which makes turkey eggs as a food item a rare delicacy.

white turkey for sale, The Beltsville Small White turkey was developed to fill a clearly identified consumer need. In the early 1930s, most turkeys raised in the United States had dark-colored plumage, were medium to large in size, and had a narrow breast without substantial meat. A 1936 survey found that 87% of home consumers wanted a New York-dressed bird (blood and feathers removed) weighing between 8 to 15 pounds. They also wanted a bird that was meaty, well-finished, and free from dark pin feathers. The U.S. Department of Agriculture research center at Beltsville, Maryland then began a seven-year breeding program in 1934 to create a bird that would answer consumer demands: a bird that would fit in apartment-sized refrigerators and small ovens, and feed small families. Researchers developed the new Beltsville Small White variety from a genetic foundation that included the White Holland, White Austrian, Narragansett, Bronze, and Wild Turkey.

According to DNR biologists, white turkeys are rare — but depending on what kind of white. It’s estimated about 1 in 100 wild turkeys are considered smoke gray, while true albino turkeys are one in 100,000

How long do white turkeys live ?

The Beltsville came into use in the 1940s and was recognized by the American Poultry Association in 1951. Their popularity peaked in the mid-1950s and, in addition to its use as a purebred, the Beltsville Small White contributed to the development of other strains of medium and small white turkeys. Though, these populations were never very well defined as breeds.

The Beltsville Small White turkey’s success was short-lived and went nearly extinct by the 1970s. While considered a good bird for families, it was less embraced by the hotel and restaurant industry. Processors also preferred larger birds to obtain more “slices.” The Broad Breasted White (or Large White) turkey came to overshadow the Beltsville because, when slaughtered at a young age, the Broad Breasted White fit the processor’s niche for a smaller turkey but had the ability to grow substantially heavier weights for the commercial food trade. By 1965, the new Broad Breasted White had nearly taken over the turkey market. Despite this, the Beltsville Small White still had advantages. Beltsvilles had good reproductive qualities, including the ability to mate naturally, and could be selected, bred, and maintained by small-scale producers. In contrast, Broad Breasted White turkeys generally required artificial insemination for reproduction.

Young Beltsville turkey hens weigh 10 pounds and young toms weigh 17 pounds. The plumage is white, with the head red to bluish-white. The beard is black, the beak is horn colored, and the eyes are dark brown. Shanks and toes are pinkish white.

Today, Beltsville Small Whites are quite rare and kept by few exhibition breeders. A research flock exists at the Iowa State University; however, public access to this flock is almost non-existent. There has been a revival of interest in the variety In recent years though, and efforts are underway to locate and conserve any remnant flocks in the U.S. and Canada.

The Norfolk Black became the favoured eating bird in Britain and in the 1700s large flocks of birds were driven to London with their feet tarred and clothed to prevent damage on the long walk. Black turkey characteristics include a fuller, gamier flavour, a smaller breast than the White varieties and a fine texture.

Named for its unusual colour, the feathers of this breed are a shimmering green-bronze, often appearing metallic in sunlight. Bronze turkeys tend to be more traditionally reared and are usually free range. Like their Black cousins, they are famed for a distinctive gamey flavour and moist meat, but also have a firm texture.

Rarer, though, are albinos, a condition marked by white skin and feathers along with light pink or red eyes. Seeing an albino turkey would be a once-in-a-lifetime experience: It’s estimated that only 1 in 100,000 Wild Turkeys is albino. Their eye-catching plumage also puts them at greater risk of an early demise.

Be the first to review “White Turkeys” Cancel reply