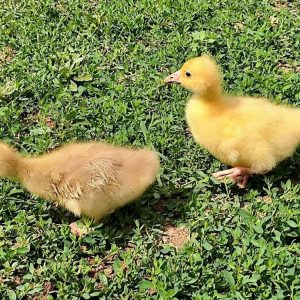 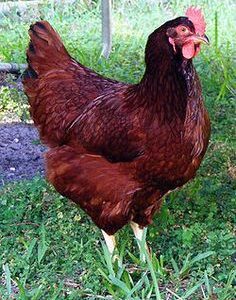 The White Guinea Fowl can be found on farms throughout North America. Domesticated Guinea originated from the wild Guinea in Western Africa. Guinea Fowl are some of the most useful and hardy domesticated land fowl in the country, and their wide range of utility and low to zero maintenance once mature have helped them become increasingly popular throughout countrysides across North America in recent years.
Category: GUINEA FOWL

White Guineas Fowl is a color mutation of the normal type pearl variety. Color description: The White Guinea Fowl is a solid pure white color in both genders. The feathers have no pearling or white spots. They have black hair feathers located on their lower necks and hackles.

Guinea fowl often referred to as guineas, are gamebirds that are increasingly popular among keepers of small and backyard flocks. Guineas are vigorous, hardy, and largely disease-free birds.

There are many reasons people raise guinea fowl. The birds sound an alarm whenever anything unusual occurs on the farm. While some people find this noise to be a nuisance, others find it to be an effective tool for protecting the farm and make guinea fowl the farmyard “watchdogs.” The loud noise of the guineas has also been shown to discourage rodents from invading the area.

Keeping guinea fowl is also an effective means of pest control. Flocks of guineas kill and eat mice and small rats. In addition, guinea fowl can be used to control insects. Wild guineas eat mainly insects, and domestic guineas can consume large amounts of insects without affecting garden vegetables or flowers. Guineas have been used to control wood ticks and insects such as grasshoppers, flies, and crickets. Guineas can reduce keepers’ risk of Lyme disease by consuming deer ticks, which carry the disease. Guinea fowl also eat slugs, and flocks have been known to attack snakes.

Guinea fowl can also be raised for meat and egg production. The meat of young guineas is tender and tastes like that of wild game. The meat is lean and rich in essential amino acids. Guinea eggs can be eaten just like chicken eggs (and should be collected daily if not used for hatching purposes). During the laying season, it is common for a guinea hen—an adult female at least one-year-old—to produce an egg a day.

There are three main varieties of guinea fowl raised in the United States: pearl, white, and lavender. The pearl variety is the most popular and typically the one that people recognize most readily. Feathers from the pearl variety are often used for ornamental purposes.

Can guineas be white? 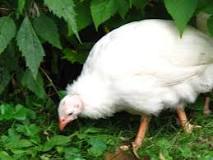 How can you tell a male from a female guinea fowl?

The male is slightly larger, has a larger, taller standing crest on top of his head, and the wattles under his chin are bigger and stick out farther than the female’s. The hen’s crest is somewhat smaller and angled more toward the rear, and her wattles aren’t as large or as deeply cupped.

Be the first to review “White Guineas” Cancel reply