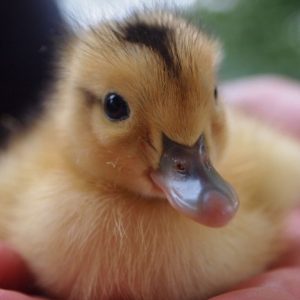 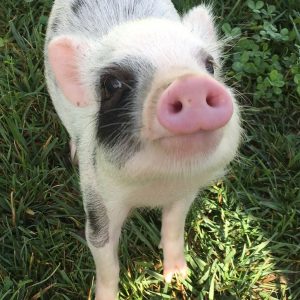 The White Crested is also a classic breed, having records of its presence as early as 1660 due them being in paintings of Jan Steen. Other Dutch painters such as d’Hondecoeter, Dirk Wyntrack (1670), Peter Casteels III (1723) and Aart Schouman (at the end of the eighteenth century) also show Crested ducks. Interestingly the Crested duck was admitted into the American Registry (1874) before the British Registry (by 1910). Though they can make a good utility bird (eggs and meat) their popularity waned and it wasn’t until the 1980s that their popularity rose again.

Crested Ducks have been around for a long time! They show up in paintings from the 1600s. While they are good utility ducks, Crested Ducks are often kept as pets and ornamental ducks due to their unusual appearance.

Production: At maturity, Crested Ducks weigh between 6 and 7.25 pounds, making them medium-sized. They lay between 100-130 eggs per year making them decent layers as well.

Temperament: In many cases, the size of the duck is related to how calm or excitable it is, with larger ducks being calmer. Crested Ducks tend to be a bit nervous, yet many have found them to be great pets.

History: The crest is a mutation, and any breed of duck can have it. It first occurred on Mallards, and throughout the centuries breeders have selected birds with crests. The American Poultry Association only recognizes two varieties of Crested Ducks: White Crested and Black Crested.

The crest is linked to a genetic condition that is said to cause as much as a 25% mortality rate at the embryo stage. Also, if you breed two crested ducks, the resulting offspring will not all have the crest. Not all breeders have noticed a higher mortality rate among White Cresteds, and many have excellent rates of crests among ducklings.

Colors: The White Crested Duck is pure white with a yellow bill and light orange legs and feet.

Livestock Conservancy Status: The LC does not list the White Crested Duck.

Body Type: White Crested Ducks have a very similar appearance to Pekins – except, of course, for the crest on the top of the head.

You can tell the quality of the crest from the moment they have hatched. If you are breeding these birds then avoid ones with off centre crests as this is a defect which is very difficult to breed out. The crest is actually a dominant mutation and typically you have around a million to one chance any breed of Mallard duck will hatch with a crest. The crested gene can actually be bred into any breed except Muscovy. The gene which produces the crest has the side-effect of preventing about 25% of the fertile eggs from hatching. An additional 25% do not hatch with the crest. They are fairly quiet birds, with the female only making a noise when she wants attention. 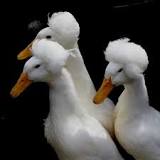 While they are good utility ducks, Crested Ducks are often kept as pets and ornamental ducks due to their unusual appearance. Production: At maturity, Crested Ducks weigh between 6 and 7.25 pounds, making them medium-sized. They lay between 100-130 eggs per year making them decent layers as well.

What is a white crested duck?

Be the first to review “White Crested Duck” Cancel reply