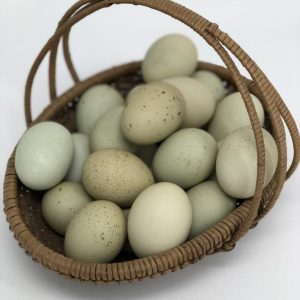 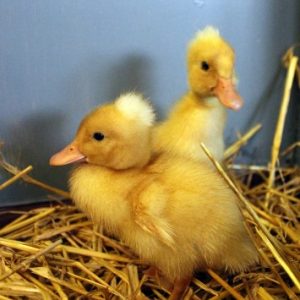 The Silver Appleyard duck is one of the best egg laying duck breeds, and one of the best tasting. When Reginald Appleyard developed the Silver Appleyard, he wanted a big, colorful duck — and it just so happens that’s what he got. These large ducks are very active and have good temperaments. New to the United States in the 1960s, they weren’t available for sale until the 1980s. Fast-forward 30 years, this breed is an exciting new addition for us at Global poultry Co. Ltd

History: Reginald Appleyard was a skilled poultry breeder with a project for a great all-round utility and farmyard duck. He aimed for a beautiful breed of duck, with a “combination of beauty, size, lots of big white eggs, white skin, and deep, long, wide breasts.”

He achieved his goal, but died before submitting a standard. Nevertheless, he produced birds that won at shows and ducklings ready for the table by nine weeks old at 6.5 lb. (3 kg), cold and plucked. Artist E. G. Wippell painted a fine pair of his birds in 1947 which became an important guide for a standard. Appleyard also developed a Miniature Silver Appleyard in the 1940s from mating a White Call with a small Khaki Campbell duck.

After 1945, the original line declined due to lack of interest in duck breeds. In the 1970s, Tom Bartlett in Gloucester, England, was largely responsible for recreating and popularizing the breed. He bought birds from market with the desired traits and selectively bred them to resemble Wippell’s painting.

As a result, the British Waterfowl Association accepted this standard in 1982. Bartlett also developed a miniature version in the 1980s, first shown at the British Waterfowl Association Champion Waterfowl Exhibition in 1987. The Miniature Silver Appleyard duck was standardized by 1997, and is approximately a third of the weight of the large breed. Appleyard’s Miniature Silver Appleyard duck was reclassified as the “Silver Bantam” in the UK.

The Silver Appleyard Duck is easy going, fun and easy to manage in small or large flocks. They grow very rapidly, lay very well and make a good choice for a dual-purpose domestic duck. Some have claimed they laid 200-270 eggs in a full 12 month span. The breed originated from the 1930’s by Reginald Appleyard, a well-known breeder in England. The Silver Appleyard duck was brought into the USA in the late 1960’s and become better known and shown in the 1980’s which lead them to be accepted into the American Poultry Standard of Perfection in 1998.

They are bred for egg and meat production and will go broody eventually and can raise a clutch of 8-12 ducklings easily. Females can have a lot of variations in color, which allows for easy identification of individuals within the flock. The female Appleyards could be described as lighter-colored mallards. They have a lot of silver white in their face, neck and breast and dramatic feathers with dark stippling over tan on their shoulders and wings.

The Silver Appleyard duck is a breed of domestic duck developed in the 1940s. It was developed by Reginald Appleyard at his famous Priory Waterfowl Farm near Bury St. Edmund, England.

And not surprisingly, the breed is named after Reginald Appleyard as he developed the breed. He was willing to create a very attractive large duck breed that would also be a prolific producer of large, white eggs.

The Silver Appleyard duck is also known as the Large Appleyard. And the miniature version of this duck breed is called the Miniature Appleyard, which was developed by Tom Bartlett of Folly Farm in the 1980s. 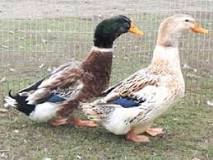 They are not among the best egg laying duck breeds, but they lay a good amount of large white eggs. And they are considered as best layers among the heavyweight ducks. … The Silver Appleyard duck is quiet in nature and well suited to being kept at home as pets.

How many eggs does a Appleyard duck lay? 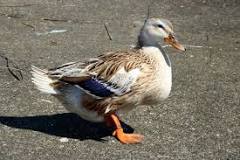 Although there are duck breeds that lay more than this breed, Silver Appleyards are among the very best heavy breed layers. A healthy hen in her prime will lay somewhere between 220 and 260 duck eggs in a single year.

Be the first to review “Silver Appleyard” Cancel reply