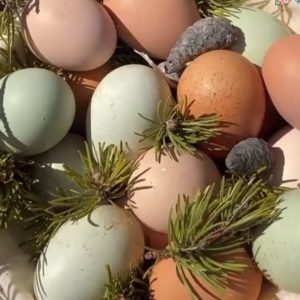 The Buttercup chicken was reportedly imported to America in 1835 and not until 1918 admitted to the American Standard of Perfection. The Sicilian Buttercup chicken originated on the Island of Sicily. It has a beautiful cup-shaped comb. A great barnyard or show fowl that is sure to please everyone. It is a delicate bird and is not winter hardy as most breeds of chickens are. The Sicilian Buttercup Chicken does not take well to confinement and more of a free range very active chicken. This chicken breed also does not go broody.

The Sicilian Buttercup is a very rare chicken. It will definitely attract attention in your flock!

Production: Sicilian Buttercups are generally raised as ornamentals. They are below average layers, and a bit too small to be considered good meat birds.

Temperament: Most birds in the Mediterranean class are flighty and skittish and the Sicilian Buttercup is no exception. They are often described as active, wild, and easily agitated. They can, and will, fly.

History: Two attributes give this chicken its name: its region of origin and its unique comb. The Buttercup, unsurprisingly, originated in Sicily. “Buttercup” refers to the shape of the comb. Both roosters and hens have a cup-shaped comb, with points forming a circle. It looks a bit like a red crown. No other breed has this type of comb.

Sicilian Buttercups came to the United States sometime before 1860, and it took quite a few generations for a standard color pattern to become established. The breed was first included in the American Poultry Association’s Standard of Perfection in 1918.

Colors: Roosters and hens are markedly different in coloring. The males have black tail feathers, and are a rich, reddish-golden color, while females have a base color of golden buff, with black spangles. They have yellow skin, white ear lobes, and red combs and wattles.

Livestock Conservancy Status: Threatened. Interest in this unusual, beautiful breed is increasing, but more work is needed by dedicated, knowledgeable breeders to ensure its survival.

Be the first to review “Sicilian Buttercup” Cancel reply