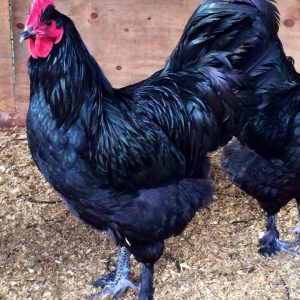 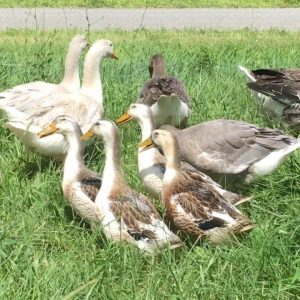 Sebastopol Geese are one of our most unusual and beautiful breeds of waterfowl. The Sebastopol has frizzled or spiraled white feathers — long curly white feathers on the back and front which nearly touch the ground and smooth neck feathers. Thought to originate in southeastern Europe, these geese cannot fly, are very gentle, make nice pets, lay eggs fairly well, and will reach a size of 10-14 pounds.

The Sebastopol goose originated in southeastern Europe, with sources pointing to the region around the Black Sea. They were named after Sebastopol, a Russian city from which they were imported to the United States. The breed was developed from wild Graylag geese, which is native to Europe, and was recognized by The American Poultry Association in 1938.

The Sebastopol is readily identified by its feathers. Long, soft-quilled, curling feathers drape elegantly from its wings, body, and tail. This modification in plumage is an example of breeding for a specific trait. The white variety of the Sebastopol is best known. Both males and females have pure white feathers that contrast with their bright blue eyes and orange bills and feet. Juveniles often have traces of gray. There are also gray and buff color varieties.

Sebastopols are medium-sized geese, weighing 12 to 14 pounds when mature. They have prominent eyes, slightly arched necks, keelless breasts, and large, rounded heads. The head’s plumage, as well as the upper two-thirds of the neck, is normal, while the breast and underbody are elongated and well-curled. The soft, fluffy feathers of the back, wings, and tail have flexible shafts, are attractively spiraled, and are so long that they nearly touch the ground. The curled feathers prevent flight making them easier to confine. Sebastopols produce 25-35 eggs annually. They have a quiet and pleasant disposition.

Whenever a domestic animal is selected for an unusual characteristic, great care must be taken to ensure that the vigor and fertility of breeding stock aren’t overlooked. Robust health and adequate size should be the foremost selection attributes. Secondarily, select for birds with well-curled breast feathers, flexible flight feathers, and back and tail plumes that are long, broad, and spiraled. Avoid selecting breeding stock with crooked toes and slipped wings.

To keep Sebastopols looking good, clean water for swimming should be made available. While they’re hardy and being raised successfully in cold climates, it’s a good idea to provide more protection during wet, cold, and windy weather than normally afforded to other breeds, as their loose-fitting feathers don’t provide as much warmth, nor do they shed water as well. Ganders can be mated with one to four geese. If low fertility is experienced, clipping the long plumes of the back and tail and the feathers around the vent is sometimes helpful. Sebastopols produce good quality meat for roasting.

Sebastopol geese are known for being friendly and quiet. They are perfect pets for families who are concerned about aggression issues when raising geese.

Why are Sebastopol geese so expensive?

Doing the math, that makes an average of 7 fertile eggs per year per female, and that doesn’t begin to take into account hatch rates. This difficulty in production is but one reason why the Sebastopol is considered a threatened species and more expensive to produce.

Be the first to review “Sebastopol Geese” Cancel reply