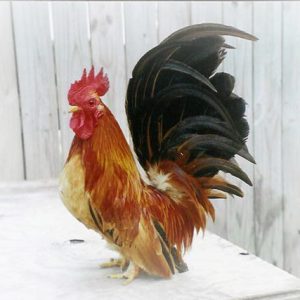 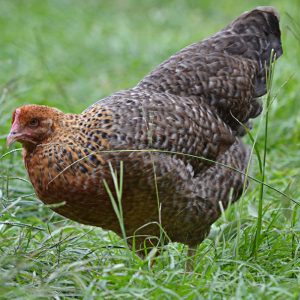 Royal Palm turkeys originate from the USA, and are a result of cross breeding of wild turkeys, Black, Bronze and Narragansett. They are white in color with contrasting black edging to the feathers. Their heads and wattles are a blueish white to red.

The Royal Palm or Cröllwitzer turkey is a breed of domestic turkey. One of the few turkeys not selected primarily for meat production, this breed of turkey is well known as an ornamental bird with a unique appearance, largely white with metallic black bands. Kept primarily as a show bird, or on small farms, it lacks the size necessary for large-scale commercial use. Pachos typically weigh 16 to 22 pounds and females 10 to 12 pounds.

Turkeys of this type are birds of a relatively smaller size than other specimens, with a very beautiful appearance. They are primarily white in coloration with sharp contrasting metallic black edges on the feathers. The lower part of the back is black, which provides a contrast with the white base color of the body plumage.

The tail of the Cröllwitzer turkey is pure white, with a stripe of black and a border of white on each feather. Its head, throat, and beard are red and its beak is horn-colored. The live average body weight of mature male Cröllwitzer turkeys is about 7.25 to 10 kilograms. And the average live weight of mature hens ranges from 4.5 to 5.5 kilograms.

This bird, relatively new to turkey breeds, first appeared in the 1920s on a Lake Worth, Florida farm, apparently as a cross between black, tan, Narragansett, and native turkeys.

Years of selective breeding followed to stabilize coloration, and the Cröllwitzer turkey was eventually accepted as a breed by the American Poultry Association’s Standard of Perfection in 1971. In Europe, a turkey of similar coloration is sometimes called Cröllwitzer or Black-Cord White Turkey.

Along with the decline of most inherited turkey breeds following the adoption of the wide-breasted white turkey breed by the turkey industry, Royal Palm turkeys today are an endangered breed. The breed is classified as “guarded” by the American Livestock Breeds Conservancy. It is also included in Slow Food USA’s Ark of Taste, a catalog of heritage foods in danger of extinction.

Both Australia and the United States report the breed as Endangered to the Food and Agriculture Organization of the United Nations. The male specimens of this breed of turkey are characterized by being non-aggressive, and the females are particularly good mothers.

Royal Palm turkeys originate from the USA, and are a result of cross breeding of wild turkeys, Black, Bronze and Narragansett. They are white in color with contrasting black edging to the feathers. Their heads and wattles are a blueish white to red.

Royal Palm turkeys are usually kept for exhibition, as they do not produce a great amount of meat, although it does have a good flavor. They have docile temperaments, yet are an active breed that require plenty of room to exercise, although they can be kept in a smaller area than the larger heritage breeds.

They are good foragers that eat many common garden pests and a free range set up is best. The females lay creamy brown spotted eggs, are broody and they make good mothers. The males often share the chick rearing with the females. Mature males weigh around 7.2 kg and the females 4.5 kg.

As far as their temperament, many turkey keepers have reported very friendly birds from their hand raised and coddled Royal Palms while other turkey keepers like to refer to them as “Royal Pains.” Due to the smaller size of the Royal Palm, they are able to breed naturally. 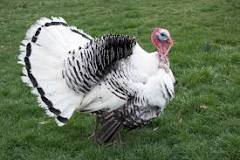 10 years
The royal palm turkey male lives for just over a year normally, the average lifespan of a domesticated turkey, however, is, typically, 10 years. Royal palm turkey can breed naturally unlike other varieties like broad breasted turkey, which needs artificial insemination due to its smaller size.

Be the first to review “Royal Palm Turkeys” Cancel reply