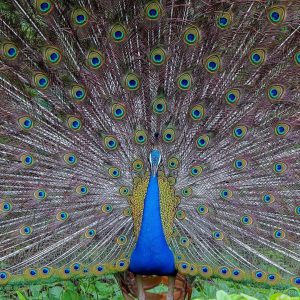 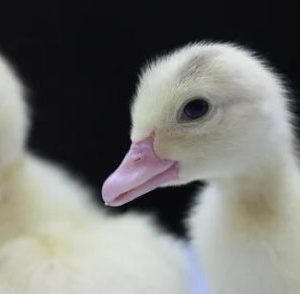 Pilgrim Geese For Sale were developed in the early 1900s in Iowa. Pilgrim Geese are a calm, quiet breed and are excellent foragers.

Mature female Pilgrim Geese will average around 13 pounds, lay an average of 20-35 eggs per year, are very calm and make good mothers. Egg fertility is lower than other breeds in our experience, averaging just around 55% over the complete season. Males average around 15 pounds.

The Pilgrim goose is known for being calm and personable. It is one of two American goose breeds that is sexually dimorphic (auto-sexing), the other being the Cotton Patch breed. Day-old males are silver-yellow with light-colored bills, in contrast to the olive-gray females with their darker bills. Adult ganders [males] are mostly white, usually with gray rumps (which are covered by the wings) and traces of color in the tail and wings. Mature geese [females] are soft dove-gray with varying amounts of white in their faces. Bills and legs are orange in both sexes, while the eyes are blue in ganders and dark brown in geese.

Pilgrims are medium-sized geese, weighing 13 – 14 pounds at maturity. The head is trim, the crown is often slightly flattened and the neck is average in length and thickness. Their bodies are full and plump, with a smooth, keel-less breast. They should have two rounded fatty lobes on the abdomen. Properly managed, they lay 35-45 six to seven ounce white eggs annually.

“Pilgrims are rugged, quiet, docile, good foragers, excellent natural parents and make good medium-sized roasting birds. Because they are sex-linked for color, it is a simple matter – even for the novice – to keep the correct ratio of males to females when selecting young for future breeders. Ganders can be mated with three to five geese” (Holderread, 1981). When selecting for breeding stock “look for broad backs and breasts that are keel-less. Stay away from using birds with any sign of a knob (an indication of crossbreeding), long necks and legs, shallow breasts, ganders with excessive gray in the plumage and geese with predominantly white necks. Because Pilgrims are noted for being sweet-tempered, this trait should be considered when retaining birds for reproduction” (Holderread, 1981). For those seeking a medium-weight goose, Pilgrims are an excellent choice for the home goose flock.

The Pilgrim goose is a breed of domestic goose from United Kingdom. It is also called Australian Settler goose in Australia.

Exact origins of the breed are not clear. But the birds are thought to be either descended from stock in Europe or developed from the American stock during the Great Depression era.

Most people believe that the breed originated in England and was exported to America and to other places.

It is also believed that the Pilgrim goose breed was developed during the 1930s by Oscar Grow in America, that is well documented and gave the breed it’s name.

The breed grow relatively faster and are raised commercially for meat production, especially in the United States. It was admitted to the American Poultry Association’s Standard of Perfection in 1939.

And currently the breed is listed as critical by the American Livestock Breeds Conservancy.

Pilgrim Geese For Sale are the only American goose breed that is auto-sexing. … They are a very friendly breed of geese. Ours never hiss unless they have a nest or goslings to protect. If their eggs are collected for sale or incubation rather than allowing them to set them all, they will usually lay around 35-40 eggs a year.
What are Pilgrim geese good for? 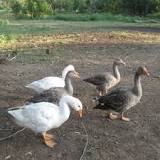 This sexual dimorphism makes pilgrim geese desirable for breeding as the sexes are easily determined. Their commercial use is primarily limited to the United States where they are bred for eggs and meat. They are known to grow relatively fast and are easy to handle.

How many eggs does a pilgrim geese lay?

Be the first to review “Pilgrim Geese” Cancel reply