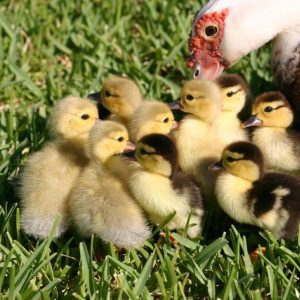 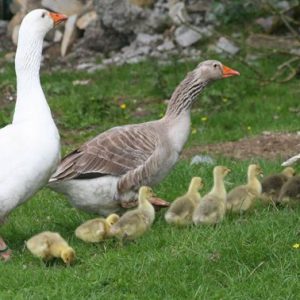 Blue PEAFOWL JUVENILE are the most iconic of all the varieties of peafowl. Peafowl are one of the most ornamental types of poultry in the world with their expansive fan of tail feathers.

In 1963 the peacock was declared the National Bird of India because of it’s rich religious and legendary involvement in Indian traditions. (Does this make it the world’s first sexist national bird? What happened to the poor peahen?)

A peahen’s clutch may range from 3—12 eggs, although 4—6 is average. The eggs are usually laid 2 days apart and in the later afternoon. Peafowl eggs take 28 days to hatch. The young are known as peachicks. For tips on raising peachicks, go to Raising Chicks. For ideas on acclimating newly acquired adult peacocks and peahens refer to the section on acclimating guineas.

For a breeding trio of peafowl you should have a minmum of 400 square feet (37 square metres). Larger pens are better. The roof should be at least 6 1/2 feet high, with sheltered roosts at least 40 inches off the ground.

Peacocks don’t develop their long trains until they are 3 years old and they molt the train yearly. In New York they begin the molt in late July or early August and are finished by September. Here’s a shot of my Black-shouldered male “Magritte” taken in early fall and another (poor) shot from December, when his train was about half grown back in. The train is not actually the peacock’s tail. The train itself is composed of 100—150 upper tail coverts, which are supported by 20 retrices (true tail feathers).

IMPORTANT ORDERING INFORMATION: Peafowl are shipped on Wednesdays, USPS Priority Mail Express, and will typically arrive in 1-2 days at your local post office. Peafowl are not available for pickup. Juvenile Peafowl are DNA sexed. Peafowl ship for free.

White Peafowl have their origins in India and Ceylon but have spread all over Europe and America. Although sometimes mistaken for albino birds, being an animal with no pigment or color, these all white birds have dazzling blue eyes and pink skin under the plumage. These birds are a common color mutation of the India Blue Peafowl, and will always breed true to their color.

White Peafowl prefer a free-range environment, but can be kept in an aviary setting with plentiful shrubbery and trees, as they will nest on the ground but will also roost in the trees at night to protect themselves from predators. They will also need a large space as they tend to roam, as well as minimal shelter in the colder winter months.

White adult male peacocks will reach an average weight of 9 to 13 pounds and adult females weighing approximately 6 to 9 pounds. Females are mature at 2 years of age and males at 3. Clutches of 4 to 8 buff-colored eggs are laid between March and July with an incubation period of 28 days. Peachicks are born fully feathered weighing just over 3 ounces and are able to fly in just a few days. The lifespan of healthy peafowl in the wild averages about 20 years, but in captivity can reach 40 to 50 years of age.

The peacock is rightly called the ” king of birds ” , its looks ranks it among one of the most beautiful animals in the world. With its ability to adapt to different growing conditions, today it is one of the most popular ornamental park birds. Hardly anyone could better describe а peacock, than ancient Hindus:

” A peacock has the feathers of an angel, the voice of the devil and the walk of a thief “. Indeed, with his looks, he is the embodiment of perfection and beauty of nature. According to a saying of André Maurois, ” Peacock is a triumph of the nature over the art “. The world has known three types of peacocks, two of which are in Asia and one in Africa, treated as two distinct genus of Pheasants family.

The most popular and widely distributed is the Indian peacock. All three peacocks have 38 pairs of chromosomes (2n). The Indian and the Green can be crossed with each other and produce fertile offspring. The United Peafowl Association (UPA) has referred 225 possible peacock plumage colours. Currently in Bulgaria is situated the largest peacock farm in Europe, with more than 25 colour variations of two basic types: Indian and Green Peacock.

Be the first to review “PEAFOWL JUVENILE” Cancel reply