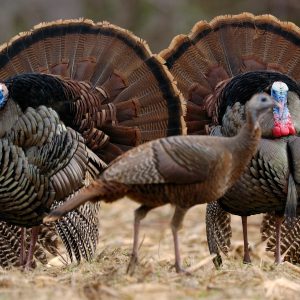 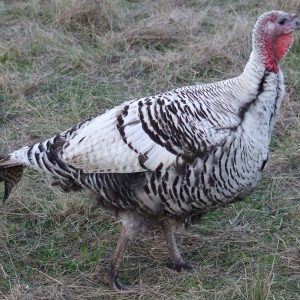 midget white turkeys for sale are the smallest variety of Heritage Turkeys.
Midget White Turkeys are the smallest turkey from all of the other heritage breeds we offer. Their appearance resembles the Broad Breasted White Turkeys, but their body frame is smaller and more slender. They will reproduce naturally. Midget White’s are docile, and the hens are broody.
SKU: N/A Category: Turkeys

This turkey is an example of the good breed improvement work of universities. In the 1960s Dr. J. Robert Smyth at the University of Massachusetts, created the Midget White turkey breed to meet an anticipated demand for a small turkey—capable of fitting into the smaller refrigerators of an increasing number of urban dwellers and single households.

Yet the market for a smaller bird did not develop as predicted and a lack of demand almost pulled this breed out of production. Even while many breeds have become rare, universities have cut funding and many research lines and breeds of poultry have been lost. Midget Whites carry the genes of some of those lost lines. In order to create the Midget White, Smyth combined a commercial Broad Breasted White turkey with exhibition Royal Palms.

After three generations of Midget White turkeys, the University of Massachusetts had to reduce its poultry holdings. Fortunately Dr. Wentworth, a professor at the University of Wisconsin and a former graduate student of Dr. Smyth, continued to develop the breed—selecting for improved egg production, fertility, and hatchability.

Until Dr. Wentworth retired in the late 1990’s, the University of Wisconsin held the largest flock of Midget White turkeys in the country. With the turn of the century, the birds were passed to poultry hobbyists and the USDA poultry facility in Beltsville, Maryland, where they stayed for a few more years. The survival of this breed now lies completely in the hands of private individuals.

The Midget White has the ability to mate naturally and lay a good number of eggs per year. More so than any other variety, they are extremely friendly and curious birds, often looking for attention from their owners. The meat of the Midget White is outstanding—a clean traditional turkey flavor without being gamey. The dark meat is extremely dark—be prepared for it’s depth of color and flavor. Each bite is savory and rich.

The Midget is a delicious option for consumers transitioning from conventional to pastured turkeys. Explorations are also underway for using the rich turkey eggs in pastry. The egg production of a breed like this could be of use to the commercial industry if they needed to increase egg production in their lines. 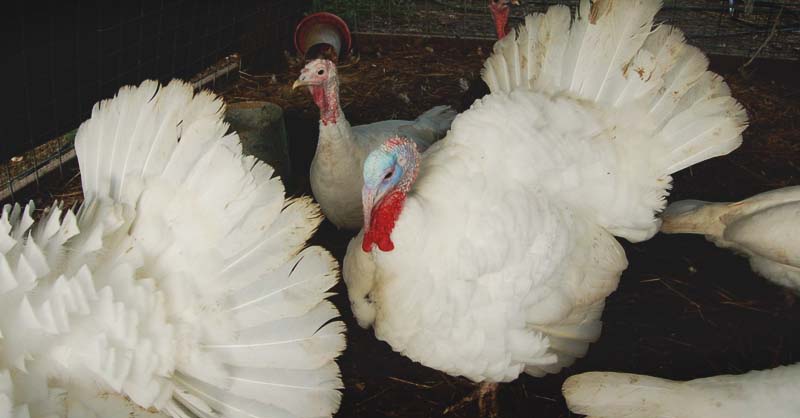 Contrary to most turkeys, Midget Whites are not large, unlike the Broad Breasted Whites that Midget Whites were bred after. These turkeys are only a bit larger than the biggest chickens. Unfortunately, Midget White turkeys are not an overly popular variety despite their fantastic attributes for a small scale farmer with limited space.

What is the rarest turkey in the world?

The Auburn, also known as the Light Brown, is a breed of domestic turkey. A heritage turkey, the Auburn is one of the rarest varieties currently in existence. It has been referenced by name in written records since the 18th century, and is named after the light reddish-brown color of its plumage.

Where are white turkeys from? 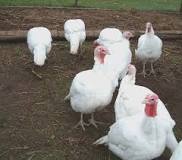 The Broad Breasted White turkey is a breed of domestic turkey from United States. It is commercially the most widely used domesticated turkey for meat. The breed was actually developed by crossing the White Holland and the Broad Breasted Bronze turkey. And it has become the dominant turkey breed on the market.

Be the first to review “Midget White Turkeys” Cancel reply