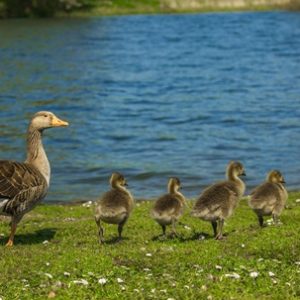 The Duclair duck is relatively new in the U.S., but the breed has been around for a very long time. The French are known for perfecting flavorful duck breeds, and the Duclair has been celebrated by chefs for centuries for its rich and earthy tasting meat.

Duclairs are a smaller sized duck, similar to the Pekin. They are quick growers, weighing 5-6 pounds in 7-12 weeks. Duclairs are also very good layers, laying 80-100 or more large green eggs per year.

Duclair ducks are great for any size farm or even a backyard flock.

The Duclair duck is an easy animal to raise, resistant to disease and highly valued for its meat. The product of local selection, it is the origin of the famous pressed duck. It exists in two varieties: black with beetle green highlights, and blue (grey), a little less widespread.
The drake’s plumage is glossy black with green highlights, the duck is slightly more matt black. The Duclair duck stands out for its white bib which decorates its breast and has given it its nickname “lawyer”.

It is a feature it shares with two other varieties. The drake’s back of the head is olive green and black in the duck. Its beak is olive green for the drake, black for the duck. This bird is average size, with a carcass weighing from 1.8 to 2.3kg (the duck weighs between 2.3 and 2.8kg and the drake between 2.8 and 3.2kg). The duck lays very light bluish-green coloured eggs.

This good layer can produce up to 150 eggs a year, each about 70g. The ducklings grow rapidly and can be consumed at 12 weeks. Smaller than its cousin, the famous Rouen duck, its flesh is just as exquisite if a bit less fatty.

The Duclair duck, like the Rouen, comes from the wild duck (Anas platyrhynchos), also, wrongly, called the Indian duck, because it actually comes from Egypt. According to legend, the Duclair duck is the product of a cross between barnyard ducks and wild migrating ducks; it says that the frolicking occurred while they were seeking cover from the North winds behind the high chalk cliffs near Duclair. However, their origin is hard to date and retrace.

Nonetheless, Corneille had already mentioned it in the 17th century. It was also mentioned in poultry writings at the end of the 19th century, as a variety indigenous to Normandy.
It was the origin of the celebrated Normandy dish, pressed duck, a merit disputed with its Rouen cousin. It is said this recipe was conceived after some townspeople’s misadventures on the left bank of the Seine. Basically, to bring their animals to the Duclair market every Tuesday, they were packed into cages that they filled to capacity because they had to pay entrance according to the number of cages.

They were so full that some of the ducks perished. They usually left these losses to the “Hotel de la Poste” kitchens. There one could eat the famous “pressed duck like mother Denise made it”. For his part, father Denise started a commercial practice still used today in large kitchens: distribution of numbered cards. If the Duclair Hotel de la Poste is closed today, you can still see the imposing fireplace where the ducks were cooked.

The Club pour la Sauvegarde des Races Avicoles Normandes (CRSAN) (Club to save the poultry breeds of Normandy) which relaunched raising a reproducing flock, each year organises the Duclair duck festival on the 1st Sunday in October.

There were 40 breeding ducks in 2014 according to INRA. The number of females kept by amateur raisers (according to CRSAN) would be at least 75 in 25 poultry farms. They produce about 250 ducks a year.
Its very reduced complement makes this breed highly vulnerable. If the Duclair duck is hardy and resistant to disease, it has been replaced by the Rouen duck or more so by the industrial or hybrid Mulard duck strain in Vendée.

The Duclair duck is a dual purpose breed of domestic duck originated from France. It was named after the town of Duclair in Normandy from where it was developed. The breed is also called Canard Duclair in French and Duclair Enten in German.

Duclair duck is a type of Rouen duck. And the blue version is described as being similar and bears a lot of resemblance to the Swedish Blue duck.

Sometimes it’s very difficult to tell the differences between this two duck breeds. On November 23, 1923 official standards were established for the Duclair duck.

Be the first to review “Duclair Duck” Cancel reply