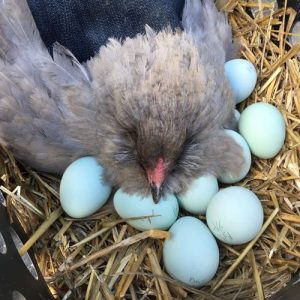 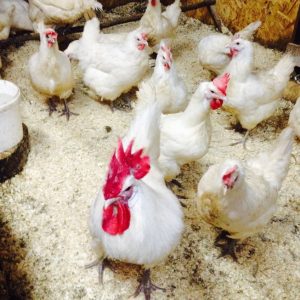 Dorkings are one of the most ancient of domesticated poultry breeds. They were brought to Great Britain by the Romans with Julius Caesar. Silver-Gray Dorking chicks have brown backs with white chipmunk streaks down the back. The wing tips, chest, abdomen and face are white. They have single combs and clean, white five toed feet and legs. Adult males have silvery white head, hackle, saddle and wing front plumage while the remaining feathers are black. The adult female has a silvery white neck and head, with the neck plumage having a black stripe. The breast and front of the neck are reddish salmon while the back, body, wing fronts and wing bows are gray, finely stippled with silvery white.

Dorkings Chicken For Sale, Looking for a breed that will bring meat, eggs, and companionship to your family? You’ve found it! The Dorking chicken is a special chicken with a rich history which is, unfortunately, currently considered endangered. The Dorking is one of the oldest known chicken breeds, possibly dating back to 43 AD.
So, if the Dorking has been around for so long, why are they endangered? Moreover, the Dorking is a well-loved breed, but certain varieties are getting harder and harder to find. What gives?
We can probably attribute the scarcity to the commercialization of the poultry industry. Faster growing chickens became a priority over many other previously valued characteristics, like taste and temperament.
The Dorking was, and is, a highly sought after chicken by those who are meat aficionados. The chicken gained popularity when it was brought to England by the Romans. It is believed to have been love at first taste.
Today, the Dorking can be purchased in small quantities from chicken hatcheries or breeders, but not all colors are available. This is a breed that needs the support of backyard chicken breeders before they are gone for good.

Production: Dorkings are good layers, but have been prized as excellent table birds from the earliest times.

Temperament: Silver Dorking roosters are quite protective of their hens, but the breed overall is friendly, docile, and likes to stay close to home. One of the most frequently mentioned qualities about Silver Dorkings are the fact that the hens make excellent mothers, and have even been known to raise chicks of other breeds.

History: Dorkings are five-toed breeds. Ancient Roman texts mention birds that seem to fit the description of the Dorkings, and it is said that the Romans brought the birds to England. They are named after the English town of Dorking, where they took on the physical characteristics by which they are known today.

The town of Dorking became a production center for the chicken breed of Dorkings. The birds were so highly prized that it was extremely difficult for years to purchase a live bird. It may have even been illegal for breeders in the town of Dorking to sell their stock.

Silver Dorkings are beautiful and practical birds. They will forage but tend to stay near home. The hens are good layers, but will certainly go broody, and will hatch and raise chicks quite well.  No one is sure when Dorkings first came to the United States, but by the time the American Poultry Association was formed, they were well-distributed across the country and were first admitted into the Standard of Perfection in 1874.

The Dorking is a stout breed, used for both meat and eggs. … However, since this chicken is endangered, and rare, the white colored Dorking is nearly impossible to find. Speaking of rare, the Dorking is one of the few breeds that sports a fifth toe!

How many eggs do Dorking chickens lay? 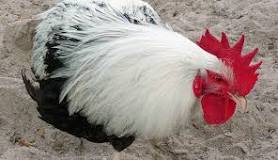 Although Dorkings are known for meat production, they’re a dual-purpose breed. Hens don’t start laying until they’re 5 or 6 months old, but once they do, they’re reliable layers of large, creamy white or lightly tinted eggs, averaging between 150 to 180 eggs per year. They also lay right through the deep winter months.

2 reviews for Dorkings Chicken For Sale