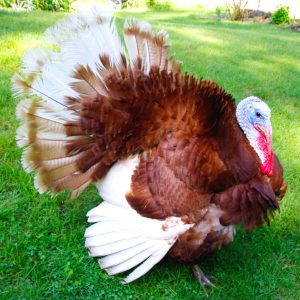 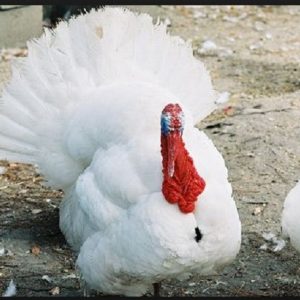 One of the larger variety of heritage breed turkeys, having all brown feathering.
Chocolate Turkeys get their name from their chocolate colored feathers. They are one of the larger varieties of the heritage breeds.  As poults, the chocolate turkeys will have yellowish/white feathers on their head and wing tips, which they out grow quickly. They are a gentle breed and can reproduce naturally.
SKU: N/A Category: Turkeys

The Chocolate Turkey is a very rare breed of fowl with brown feathers, shanks and feet. Chocolates are one of the larger Heritage turkey varieties, but without health and mobility issues of other large breeds.

The babies are brown with a light colored head.

The history behind this breed is unclear. They were common in the southern U.S. and France before the Civil War. Large numbers of of the breed were lost during the war and never made a come back. Today they are still critically endangered.

The name describes the color of its feathers, shanks and feet. They used to be common in the south and in France. This turkey variety was well established in the southern part of the U.S. before the Civil War which caused a great decline in turkey breeding throughout the southeastern states and the Chocolate turkey never recovered to pre-war popularity.

Chocolate describes a variation of the plumage color due to the epistatic interaction between black and  brown genes. Which means that they are basically a black bird which has been diluted to the chocolate coloration by the presence of the sex-linked brown gene. The toms have two (ee) brown genes while the hens have only one (e-)

The genotype for a purebred chocolate is BBee for toms and BBe- for hens. Black based with brown dilution genes.

The poult at hatch has a down color pattern that resembles a black poult with a substitution of a brown pigment where the black would normally be present. The adult bird has a solid milk chocolate color.

Any white barring or light colored spots in the wings or bronze patterns and or white tipping in the feathers is a fault in this variety.

Most chocolate turkeys today are not pure, they are definitely carriers of (b)bronze and (n)narragansett genes, some may even carry one dose of (r)red as well.

So when breeding these unpure chocolates, a few Auburns,Silver Auburns and red carriers can pop out as well.

I have developed a line of chocolates to be the correct, solid chocolate brown color and true breeding as well. 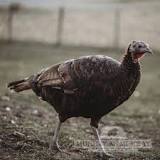 The Chocolate Turkey is a very rare breed of fowl with brown feathers, shanks and feet. … Large numbers of of the breed were lost during the war and never made a come back. Today they are still critically endangered.

How big do chocolate turkeys get? 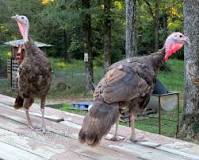 We were also attracted to the chocolate turkey because they produce more meat than most of the other heritage breeds. A mature tom averages 33 pounds while his hen averages a mature weight of 18 pounds. They’re dressed weight is 24 to 28 pounds for the tom and 14 to 16 pounds for the hen.

Be the first to review “Chocolate Turkeys” Cancel reply