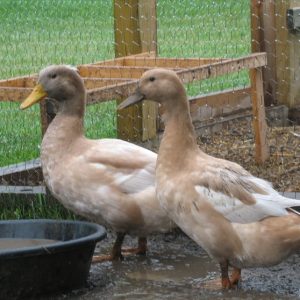 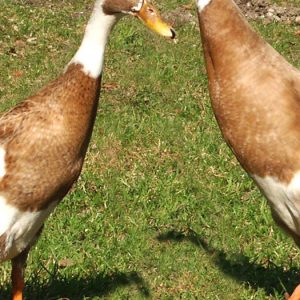 blue cayuga duck uk breed is thought to have been developed from the wild Black Duck breed in the region of Lake Cayuga in New York. This makes it one of the few duck breeds originating in the United States. Prior to the arrival of the Pekin breed, they were the bird of choice for meat production in the Northeast. Once the Pekin arrived with its white feathers and cleaner appearing carcass, the Cayuga quickly lost its appeal. They remain a very hardy duck and many of their eggs have varying degrees of gray in the shell color. On rare occasions they will lay a pure black egg.

The Cayuga is an American breed of domestic duck. It was introduced to the Finger Lakes region of New York State in about 1840, and is named for the Cayuga people of that area. Until the last years of the nineteenth century it was the principal duck reared for meat in the United States.

This breed takes its name from Cayuga Lake (which is itself named after the native Cayuga People). Some assumptions are made that it is partly descended from the American Black Duck, which is the closest wild relative of the Mallard. The Cayuga drake develops a tail curl like a Mallard, which the American Black Duck does not.

The breed was was first mentioned in 1809, with other records mid-century. Since that time the fabulous beetle-green lustre on the black plumage has been much sought after. It is caused by refraction of light on the structure of the feathers. This is also seen in the Black East Indian Duck, which is a bantam breed.

As this breed was developed in North America it is used to harsh conditions. The Cayuga is a hardy breed and both the drake and the hen have good temperament and are quiet. When they first start to lay, their eggs can be completely black and this is a good sign that the resulting duck with have a good colour. The ducks do not remain black for all their life and often produce white feathers as they get older, which tend to appear after each moult.

Cayugas are unusual, beautiful ducks. They are also quieter than many other breeds, and are sometimes described as “sweet.” Why wouldn’t you want a duck like that?

Production: If you are looking for a duck that will provide some eggs, and could also be a good bird for the table, consider the Cayuga. Many say that the meat of a Cayuga is exceptionally flavored. They lay 130-180 eggs annually and weigh 5-6 pounds at maturity.

Interestingly, early in the season, Cayugas lay black eggs. As the season progresses the color of the eggs lightens, until the fall when the eggs are completely white.

Adding to its practicality for the small farmer or backyard flock keeper, the Cayuga is known to be one of the hardiest of all the duck breeds. It is an excellent forager and prolific layer. It is considered to have “fair” mothering abilities.

History: Some breeds have a clear, well-documented history. We know the breeders who developed them, and the other breeds that make up their ancestry. The case is not so clear-cut with the Cayuga.

The word “Cayuga” is the name of a lake in New York and one story is that a miller captured two wild, black ducks on his mill pond in Dutchess County, New York, where Cayuga Lake is located. The miller pinioned the wild ducks, who promptly settled down and began producing copious offspring. It’s a pretty good story, but there’s not any evidence to back it up.

Another possibility is that the Cayuga originated from a black duck breed that was commonly found in Lancashire, England, but that has since disappeared because breeders preferred the Aylesbury.

The Cayuga was accepted into the American Poultry Association’s Standard of Perfection in 1874. The breed was a favorite with farmers until the 1890s when Pekins came to dominate the market.

Colors: The Cayuga’s color is its most distinguishing characteristic. It is black, with a beetle-green tint. The bill, legs, and feet are black as well, though the bill can have an olive tinge. As Cayugas age, their feathers will often begin to change colors – like some humans, they “go gray.” Their feet will also begin to look more orange with age.

Livestock Conservancy Status: Threatened, meaning there are fewer than 1000 breeding birds. However, the LC also states, “The Cayuga is in a good position to increase rapidly in numbers with little effort.” They are available at most of the large poultry hatcheries.

Body Type: The Cayuga is a medium-sized duck with a large breast. 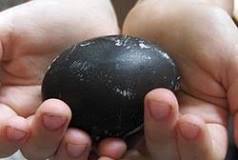 By Holly Fuller – Cayuga ducks are a threatened breed. These beautiful, iridescent, green feathered ducks are great for their flavorful meat, egg production, show quality, and their ability to make great pets. Their medium size (6-8 lbs.) and quiet quack make them an excellent choice for a backyard duck. 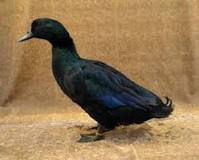 Cayuga ducks can lay 100 to 150 eggs per year that can be used for general eating and baking purposes. Eggs are initially black in color, but as the season progresses, egg color lightens to white. The plumage of the Cayuga is uniformly greenish-black and may become mottled with white as they age.

Be the first to review “Cayuga Duck” Cancel reply