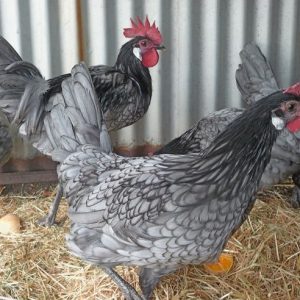 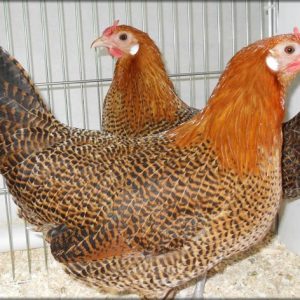 We have beautiful polish chicks for sale. Both Sex. We have parent birds, you can Also Buy them if you like. They are my babies making machines. we have variety of colors available. All monies to our chosen charity..

What is a buff laced Polish ? 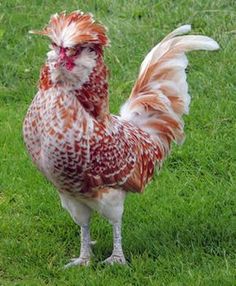 Polish are a very special and unique breed of chicken with their huge bouffant crest of feathers and v-shaped comb. They are tame but their behavior can be a bit wacky since their crest limits their vision. When in a flock with more aggressive breeds, Polish will tend to be on the low end of the pecking order. Egg laying is varied in this breed – some lay well and some very poorly. In short, Polish are sweet, beautiful exhibition birds and can be good layers in the backyard flock, but they’re not reliable. Please note that our flocks produce a mix of bearded and non-bearded Polish.

If you are looking for a breed that will make you smile, and get plenty of attention for its looks, the Buff Laced Polish might be the bird for you!

Production: Polish chickens were originally bred as egg layers, but are now mostly ornamentals. They do, however, lay 200 or more white eggs each year, making them practical to a degree.

Temperament: One Polish owner describes her bird as “spastic.” This breed has been domesticated for hundreds of years and enjoys human company. Its distinctive crest can limit vision, though, which can impact temperament.

History: The name “Polish” might lead you to think that this breed originated in Poland, but that would be incorrect. The breed was developed and standardized in the Netherlands and Germany. No one is sure where it originated, though some think it may have been in Eastern Europe.  The reason that this breed is named Polish is that their crests look a bit like the headgear once worn by Polish soldiers.

The shape of this breed’s skull causes the unusual crest of feathers. Some varieties have beards as well. The combination of a Buff Laced Polish chicken’s looks, attitude, and egg-laying ability has kept it a favorite for many years.

Due to the breed’s lower-than-average visibility, it is sometimes more vulnerable to birds of prey than other breeds. Another consequence of the crest is that the Polish are a little nervous so owners must be careful to not startle them. Also, its crest attracts mites and other pests, so extra caution should be taken to prevent infestation.

Body Type: The Polish have a similar body shape to the Leghorn, but with a protuberance on the skull, causing the crest.

Be the first to review “Buff Laced Polish” Cancel reply