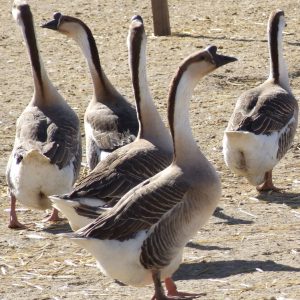 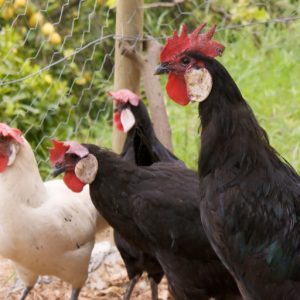 It is interesting that the buff color is not common in wild waterfowl. Most other domestic and wild geese have combinations of white, gray and black coloring.

The Buff goose was developed for commercial meat production and the claim is that their feathers are easier to remove than white, gray or black feathers as they are less strongly rooted. The remaining pin feathers are so light in color, the carcass is as clean appearing as a white goose. Buffs are a calm, friendly breed and beautiful to watch – especially in a reddish orange sunset.

The American Buff goose is an extremely rare poultry breed that was developed in the USA, and is mostly used by small farmers. They are the largest among the geese belonging to the medium weight class. These gentle geese do not need extreme care, and are a good choice as pets for a home flock. Interestingly, their buff color is not common in waterfowls, with most other wild and domesticated geese having combinations of gray, white, and black.

The American Buff Goose is a calm, friendly goose, that dresses out nicely for the table and is a pleasure to watch.

Production: An average adult Buff will weigh between 16 and 18 pounds. Few breeds of geese are frequently described as “friendly” but when you read about Buff Geese, that is a word that shows up often. One breeder describes them as “chatty” but never to the point of being annoying.

History: The Buff Goose is one of only two breeds of geese originating in the US. It is also considered a colorful goose, as most geese are feathered in shades of white, brown, and black. The Buff is an apricot or fawn color.

While we know that the Buff is descended from the Graylag Goose of Europe and Asia, no one is sure how the Buff was developed. There may have been natural mutations and selective breeding, or it may have been that a breeder or breeders used cross-breeding until they obtained the bird we now know as the Buff Goose.

It may be that the Buff was intended for commercial production at one time because its feathers are supposedly easier to remove than white, brown, or black feathers, but it is certainly not used for commercial production today. There is a critically low population of these beautiful birds and more breeders are desperately needed. The American Poultry Association included the Buff Goose in the Standard of Perfection in 1947, in the Medium Goose class.

Colors: The color of the Buff Goose is usually described as fawn or apricot. The Buff has reddish-orange legs, feet, and bill, though the nail, or claw, on the foot is pale pink.

Livestock Conservancy Status: Critical, which means there are fewer than 500 adults, breeding birds in the United States.

Body Type: The Buff has a stocky body, with no keel and two rounded lobes on the abdomen. Its tail is held in line, or just slightly higher than, the body. It has a wide head and brown eyes. 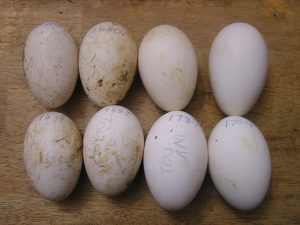 They produce almost 10-25 eggs each year. The eggs are large and white. The meat of the American Buff is a tasty, rich, and dark.

What type of animal is an American buff goose?

The American buff goose is a bird related to the domestic goose found in America. They are very silent and docile birds. They are very calm and have friendly personalities. These geese are good to have for general purposes on a poultry farm such as providing eggs and meat.

What class of animal does an American buff goose belong to?

These birds belong to the class of Aves just like many other birds. Not much information is available regarding their family and scientific name. These birds are a breed of domestic geese, so it is assumed they share similar properties to them.

How many American buff geese are there in the world?

The American buff goose is considered an extremely rare poultry breed. As of now, these buff geese are very close to extinction and therefore listed as Critical by the American Livestock Breeds Conservancy.

Where does an American buff goose live?

The American buff goose was developed in North America. They are descended from wild gray geese found in Europe.

How do they reproduce?

There is not much information regarding the breeding habits of these intelligent geese. American buff geese lay 10-20 eggs. They are very loving and caring and make excellent parents. They take care of their goslings. Buff geese are also known to be amazing surrogate parents to eggs of other geese as well. The eggs are incubated for 28-34 days before they hatch after which they are cared for unconditionally by their mother.

Be the first to review “Buff Geese” Cancel reply