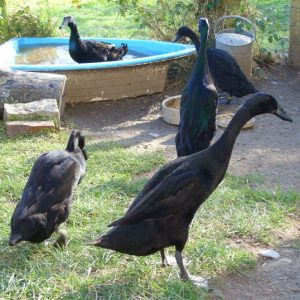 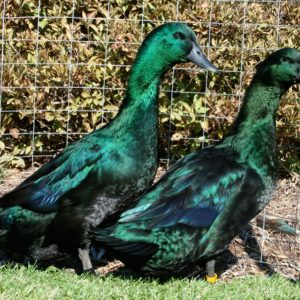 Buff drakes and hens are are both the same golden buff color, with the exception of the drake’s head which is a beautiful seal-brown. Buff hens are good layers, not broody, and will weigh approximately 5 pounds. Drakes are about one pound heavier than the hens.

Cook’s deliberate breeding tactics created the Buff, Black, White, and Blue Orpington duck varieties. The Kent duck breeder was attempting to create multiple colors of the orpington duck to capitalize on the buff-colored plumage fad that was raging in Europe during the early part of the 20th Century. The White Buff Orpington duck variety did not garner nearly as much popularity as the other breed varieties William Cook created.

In 1908, Cook brought his Buff Orpington ducks to America to display them at the Madison Square Garden Show. By 1914, the Buff Oprington breed was allowed entry into the American Standard of Perfection books listed simply under the name, Buff. The labeling of the breed by the poultry association was quite unusual, it is perhaps the only known instance of a breed being listed only by its color.

The Buff Orpington duck breed was standardized in Great Britain in 1910. In 1926, the Blue Orpington variety was standardized. Members of this breed were far more popular on a commercial farming scale in Europe than they ever became in the United States.

The Buff or Buff Orpington was developed by the William Cook family who lived in the Orpington area of Kent, England in the early 1900s. It was developed as a multipurpose bird, with the ability to lay good quantities of eggs along with having the size and feather color to make a good roasting duck. Some even claim that the buff colored feathers are easier to pluck than the white Pekin feathers.

Buff Orpington ducks are a friendly and docile multi-purpose breed of poultry bird. These attractive ducks are often kept solely as farm pets or “pond ornaments” due to their affable nature and graceful beauty.

A Buff Orpington duck (sometimes called just Buff, for short) is also a quality meat bird. While the Pekin duck breed reigns supreme in the United States from a duck meat perspective, this breed has also traditionally been kept globally for its robustly flavored meat.

Buff Orpington ducks, as is the same with all domesticated breeds, cannot truly fly. At best, they can flap their short wings quickly enough to lift their webbed feet a few inches off the ground and then bolster themselves forward for roughly one foot.

Their meat is considered tasty and of high quality. Unlike many breeds, their light-colored pin feathers do not leave a dark trace on the carcass, when plucked. This makes them very nice looking meat birds upon processing. Unlike the pekin ducks, the buck ducks take a relatively longer time to grow. They can be ready for market in 8-10 weeks. 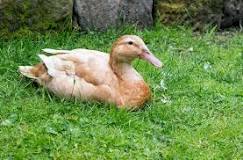 These ducks are friendly and social, making them an excellent pet for families with children. They are not noisy like some other duck breeds are known for being.

Buffs lay white to cream colored eggs and are good foragers which will keep feed costs down. The amount of duck eggs received yearly will range between 150 to 220 large eggs.

How many ducks should I get?

For starters, ducks are easy to raise even in a small backyard. They are extremely social, so consider raising at least three (but preferably five or six) together. In terms of male versus female ducks, good flock makeups include three females (and no males) or a male with four or five females.

Be the first to review “Buff Duck” Cancel reply