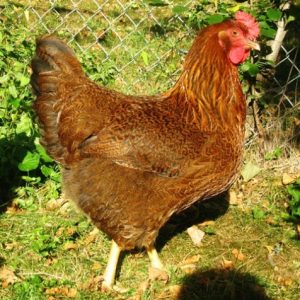 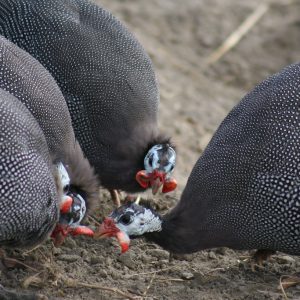 Global Poultry Co. Ltd® offers quality Brown Guinea fowl for sale. Guineas are some of the best “watch dogs” for alerting and sounding off when human or animal intruders come into their territory or home turf. They are also among the best ways to get rid of ticks and unwanted bugs on your property. They are low cost, low maintenance, and a great alternative to chemical pest control. And their meat is a delicacy in many parts of the world.

Guineas can glide-fly for quite a distance. And they like to fly to the tops of trees. To keep them grounded, rather than pen them you can clip one wing. Leave the other wing unclipped. Then, when they try to fly, instead of flying straight they turn. They don’t like that, so they stay on the ground.

Brown Guineas fowl are birds within the order of Galliformes, which also includes such birds as turkey, grouse, chickens, quail and pheasant, along with a few others. They are native to Africa and the most common of the Guinea fowl, the “helmeted Guinea fowl” have been introduced in many other countries around the world including the US. Here in the US, the helmeted Guinea fowl can be found in many of the warmer states of the central and southern regions. Some people raise Guinea fowl for food or for their eggs, but others keep them as their farm “watch birds”.

The helmeted Guinea fowl is about the size of a large chicken. They have a round body and a small head for their size. Their head is featherless with a crest on the top and bright red “waddles” around its beak. It has dark grey or black plumage with obvious white spots. If you can overlook their rather ugly head, they are really rather beautiful birds.

Guineas are known for being “seasonal” layers. Their eggs are a bit smaller than the average chicken egg and are very hard shelled. The guinea hen will lay eggs in a secluded nest on the ground. In season, they may lay one egg each day until they have a clutch of 20 to 30 eggs inside a deep, tapering nest. They like to hide their nest and will sometimes share the nest with other hens until they have accumulated a large clutch. The incubation period is about 26 to 28 days. They are also known for NOT being good mothers. Once the chicks, which are called “keets”, hatch, they are pretty much on their own. The mother may lead her keets out into tall grass and basically ignore them and many won’t return as they are highly susceptible to wet grass and can dry from the dampness.

The guineas diet consists mainly of seeds and insects. They are known for being ravenous bug eaters and are many times are kept to help control tick and grasshopper populations. They also eat ants, grasshoppers, wasps and flies as well as cutworms, grubs and snails. They also are known for being “weed” seed eaters and help in controlling the weed population. They rarely will bother your flowers or garden plants, they would much rather eat the insects they find there. They will also discourage rodents with their call and will kill and eat mice and rats.

Be the first to review “Brown Guineas” Cancel reply