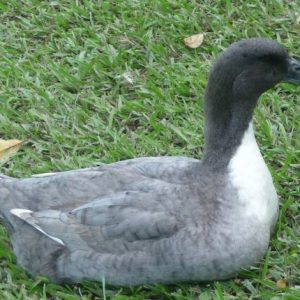 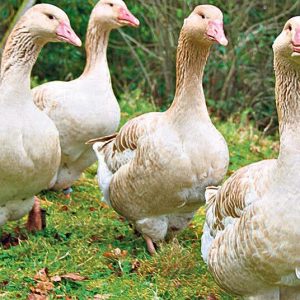 Brown Chinese Geese are smaller than the White Chinese Geese, with identical coloring to the African Goose. Chinese geese are generally more “talkative” than other breeds of geese, making them a great option if you want to be alerted to intruders or other strange occurences.

The Chinese goose originated in China from the wild Asiatic Swan Goose. The earliest record of Chinese geese in America dates back to George Washington, who received a pair of Chinese Geese from Governor Morris in 1788.

Brown Chinese Geese are the smallest of the domestic geese. They are light and graceful, good layers, and make excellent weeders.

Production: You can expect 45-55 eggs per year from a Brown Chinese Goose, and they will reach 10-12 pounds at maturity.

Temperament: Brown Chinese Geese are friendly, they like people and they love to “talk.” If you raise them from goslings, they will talk to you excitedly whenever they see you.

History: Brown Chinese Geese are derived from the wild Asiatic Swan Goose. Their long, curvy necks and graceful bodies make them among the most attractive geese. The first mention of Chinese Geese in the United States appears in the letters of George Washington, who received a pair as a gift.

Aside from their beauty, these geese are practical for the small flock or farmyard. They will gladly do your weeding for you, as they love to eat grass, and must be trained to eat broad-leafed weeds.

Brown Chinese Geese are also active foragers, meaning they need less supplemental food than some other breeds. They are also great watch animals. Being very vocal, they will definitely “sound the alarm” when anyone or anything comes into their territory!

Colors: Brown Chinese Geese have dark, rich, fawn-colored feathers, with accents of a beautiful creamy white. The bill, feet, and legs are brownish-orange or dark orange.

Like many bird breeds, Chinese geese have cloudy origins. They most likely descended from the swan goose in Asia, though they’ve developed different physical characteristics, such as longer necks and more compact bodies. However, they’re still known to have a swan-like appearance, so much so that they’re oftentimes referred to as the “swan goose.” While goose breeders speculate about why these characteristics developed (environment, diet, intentional breeding), no one knows for certain. As a distinct breed, Chinese geese were most likely imported from Asia into Europe, and then into North America by 1758 through trade with Jamaica.

There are lots of legends and stories about geese, and Chinese geese are no exception. For instance, they supposedly protected Rome from invasion in 390 BCE by (loudly) sounding an alarm as the Gauls attacked.

In the 17th century, Nicolas Robert recorded through engravings that Chinese geese inhabited Versailles’ menagerie, which later turned into a small farm where Marie Antoinette frolicked, pretending she was a simple farm girl.

It wasn’t until 1874 that they were admitted into the American Poultry Association’s Standard of Perfection with a name and a description of what an ideal Chinese goose should look like. They were classified with both white and brown colors in the “light goose” category. By 1876, three Chinese geese were exhibited as “Chinese swans” at the Agricultural Show during the Centennial International Exhibition in Philadelphia, the first official World’s Fair in the United States.

White Chinese have white feathering with an orange bill, orange legs, and blue eyes. The brown Chinese have brown eyes, orange feet, and a black bill. Their feathering is brown with a brown stripe that runs down the back of their necks. 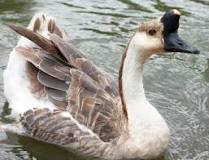 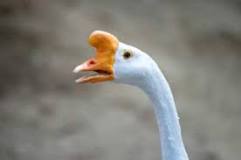 However, if they are not around people much, or handled often, they can be quite aggressive. History: Many people say that Chinese Geese are “swan-like,” and in fact, the breed is descended from the wild Swan Goose that is native to Asia.

Be the first to review “Brown Chinese Geese” Cancel reply