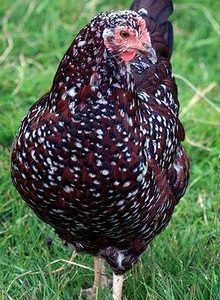 The history of these can be traced back to Japanese paintings over 300 years old. These bantams carry their tails upward and higher than the head. The wings angle down and back along the sides. Good layers, nice for show, and very popular. Because of a genetic characteristic in Japanese bantams there is no such thing as a pure short legged Japanese.

You may experience some chicks with medium to long legs. The sharp congrast of their white body feathers make this breed very distinguished looking. The primary wing feathers are black with white edging, while the front wing feathers are all white. Add the bright red comb and wattles, and you have a truly majestic bird.

Japanese Bantam Chickens were first known as Chabo Chickens and are an old and well established Asian bantam breed. They probably originated sometime in the late 16th Century in what was then Southern China. They were taken to Japan in the early 17th Century, where different colorations probably developed. The Gray Japanese Bantam was first to be admitted to the American Standard in 1914.

They start to lay eggs from around 16 to 22 weeks old. Breeding: They are very difficult to breed due to the lethal gene that is responsible for their short legs. Breeding Japanese Bantams should be done by experienced breeders or under the guidance of an experienced breeder.

Here are some Japanese bantam facts that are good to know if you’re considering adding these type of birds to your flock. Tame Temperament – Japanese bantam chickens are sweet and easygoing. … Weather Concerns – This small, fragile bird is not a cold weather hardy breed.