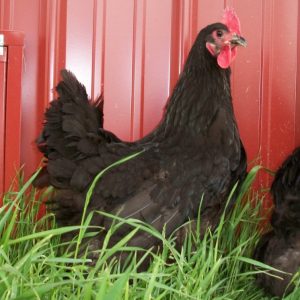 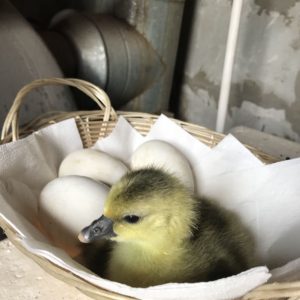 Black Langshans are also from the Asiatic Class of poultry and are a pure breed that originated in China many years ago. These large stunning birds are pure glossy black with bright red combs, dark eyes, and black shanks. Langshans are not as heavily feathered down the legs and toes as Cochins and have a more pronounced upright appearance. Chicks are black with some white on the underside. These are very nice show birds, lay large brown eggs, and are gentle.

Langshans, a rare, endangered breed from China, lays a pretty brown egg. The Croad line of Langshans once laid a dark brown egg, but this line is not available from hatcheries (and is even rare to find from breeders). The Langshan is a graceful, nicely-proportioned bird with feathered legs. They are good layers, but somewhat slow to mature to their full size and begin laying. They are also quite active for such large birds! Today they’re mainly kept by those conscientious folks who want to ensure this breed’s continued survival.

Langshan chickens are an old breed that originally hails from China. They are named after the Langshan District or Langshan Hill near the Yangtze River.

Langshan chickens were first imported to England in 1872 by Major A.C. Croad, and from there, were imported to America in 1876 by the ornithologist, E.A. Samuels of Waltham, Massachusetts. Langshans were appreciated in both countries for their eggs, meat, and beauty.

Langshan chickens are no longer a common breed, and they have been given a conservation status of “Watch” by The Livestock Conservancy. However, some major hatcheries are now breeding Langshans, so they are available to backyard chicken keepers in the U.S.

If you Google “Langshan chickens,” you may come across images of chickens that look very different from each other. That’s because Langshans have been developed into 4 distinct types (of which, only 1 type is recognized in the U.S.). The 4 different types are:

The only type recognized in America was developed from the Croad Langshan, although the “Croad” has been dropped from the name. They are just referred to as “Langshans” here.

American Langshans are particularly tall, full-bodied, and have thick and stunning plumage.

What is notable about the Langshan chicken’s appearance?

Langshan chickens are gorgeous. They are very tall, full-bodied chickens with dense and stunning plumage, long necks, and long tails. Langshans have a characteristic “U” shape in profile. You can see this U shape very clearly in the video below showing a beautiful, White Langshan rooster.

How big do Langshan chickens get?

Langshan chickens are a very large breed. Although not the heaviest breed, they are the tallest of the non-game chicken breeds.

What are Black Star chickens? 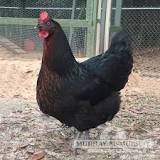 This little egg superstar is a docile and very hardy little bird. It is adaptable, thrifty and low maintenance since they can adapt to local conditions, be it hot, cold or in between. They are friendly and curious and can be cuddly if you raise them so. They are also good with children.

Be the first to review “Black Langshan” Cancel reply