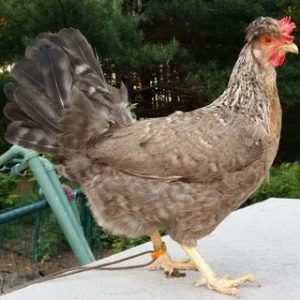 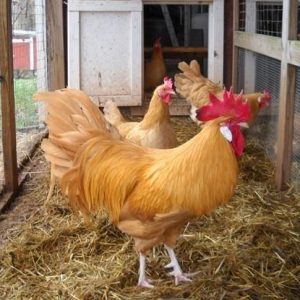 This is the original Jersey Giant developed in New Jersey in the late 19th century by crossing several of the large, dark Asiatic breeds. It is a super heavy bird even a little larger than the whites. It’s black plumage has a beautiful green sheen, the eyes are dark brown, shanks and toes are black except for yellow skin showing on the bottoms of the feet. With the straight red comb and tremendous size it makes an unusually handsome variety for exhibition.

Hens are good layers of brown eggs and especially persistent through cold weather. Baby chicks are mostly black but do show creamy patches on the underbody, wing tips, and around the face. The white persists in the plumage until final molt of chick feathers takes place.

The Black Jersey Giant chicken was originated in Burlington County in the State of New Jersey during the 1880’s. A good heavy breed but slower to grow than some breeds before surpassing them in weight and size. They are slow to mature and have a poor feed/weight conversion, which explains why they aren’t popular as a commercial broiler, although they were popular in the late 1800’s for chickens for meat.

It is the largest of the dual purpose chicken and eventually excels as a meat chicken and a fairly good laying hen. When grown the black feathers take on a green sheen within the black color. These chickens were admitted to the American Standard of Perfection in 1922 and both varieties (whites and blacks) are noted for willow colored or nearly black legs and toes. We offer this chicken breed in a production line and not a show line.

Newbie notes: There are some white feathers in their 1st and 2nd stage feathering which is normal but by the 6th month they are solid black feathers.

You want a big chicken!

Jersey Giants are, on average, the largest chicken breed. Yes, even larger than the mighty Asiatic giants—Brahmas, Cochins, and Langshans.

A standard Jersey Giant rooster weighs ~13 pounds and a hen weighs ~10 pounds. Think about that for a minute. Your Jersey Giant hens will weigh more than most of your roosters from other breeds!

Jersey Giants are also very tall with roosters reaching ~2 feet in height and hens reaching 1.5 feet. They aren’t, however, the tallest chicken breed—that honor goes to the rare and beautiful Malay.

Why the heck are Jersey Giants so large? They were purposely developed this way in the late 1800s by their creators, John and Thomas Black. As Frances Bassom says in her book,

You want a beautiful chicken.

Jersey Giants are gorgeous. They come in a few different varieties, although not all are recognized by the American Poultry Association. And they also come in bantam (i.e., miniature) forms.

The best-known varieties of Jersey Giant are Black, White, and Blue. The birds also come in a Splash variety, and some breeders are allegedly working on Barred and Silver varieties.

Black Jersey Giants are the most common variety. Their black plumage has a stunning iridescent green sheen that is breathtaking when it glimmers in the sun’s rays.

You want a chicken to provide eggs for you.

Jersey Giant hens aren’t prolific layers, but they do tend to provide a decent number of brown eggs.

The age that Jersey Giants start laying varies greatly. Some have reported their Jersey Giants are very late to lay at 8-10 months, or even as long as a year. Others have said their Giants laid at about 5 months.

Also, some hatchery strains of Jersey Giants are much better layers than the norm. They lay early (about 5 months), and may lay 4 eggs a week or more (200+ eggs a year).

Jersey Giants do tend to continue to lay during the winter months as well.

Are black giant hens good layers?
With the straight red comb and tremendous size it makes an unusually handsome variety for exhibition. Hens are good layers of brown eggs and especially persistent through cold weather.

How many chickens do you need for a rooster?

The answer to how many hens per rooster is; generally, experts suggest one rooster for every seven to ten hens. But this number may also depend on the chicken breed your flock has. For a big flock, you can see 2, 3, 4, or more roosters often present without causing any issues. Yet this is too risky for smaller flocks.