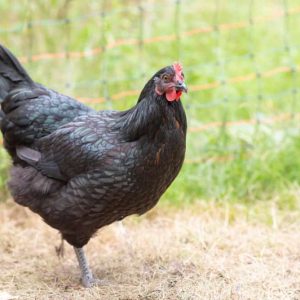 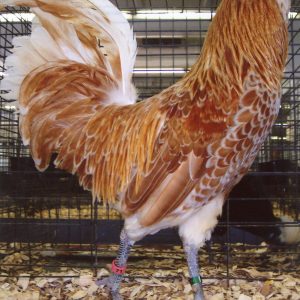 This blue feathered chicken comes from the Mediterranean area where it is still found today (although in very small numbers).
A rare beauty is a very apt description of this ancient breed.
It is a bird that enjoys its’ freedom and is very capable of surviving in adverse conditions.
In this article we discuss everything you need to know about the Andalusian Chicken.

Andalusian chickens were first imported into England by Leonard Barber from 1846 to ’47. These birds came from Andalusia, about 25 miles from Cadiz, from Xeres de la Frontera. In 1851, Mr. Coles of Farnham and John Taylor of Shepherd’s Bush also imported more. Andalusian chickens were widely distributed around Cornwall and Devon. The breed was first exhibited at the Baker Street Show, in London, in January of 1853. Somewhere between 1850 and 1855 Andalusian chickens arrived in America.

Andalusian chickens stand high in productivity. It’s one of the best layers of eggs, an excellent winter egg producer, has white flesh with plenty of breast meat – though the carcass isn’t very plump, it’s an active forager, and is rugged and hardy. Chicks feather and mature quickly, with cockerels crowing at seven weeks old. The body type – more coarse than a Leghorn – is easy to produce and maintain.

The chief distinction for Andalusian chickens is the blue color of their plumage. Each feather should be a clear bluish slate, distinctly laced with a dark blue or black. Blue-colored fowls are produced as a result of crossing black fowls with white fowls. When two Blue Andalusians chickens are mated together 25% of the chicks will come black in plumage, 50% blue, and the remaining 25% white or splash (white with blue or black splashes).

The best colored Blue Andalusian pullets are produced by mating a dark blue male to a properly colored hen. The best colored Blue Andalusian cockerels are produced by using slightly dark parents of both sexes. There is a tendency for the color to become too light as generations go by. The periodic use of black offspring will repair this defect. The blue ground color should extend down to the fluff.

Andalusian chickens are wonderfully designed for foraging on the range. The breed’s rugged nature makes it hardy, even in cold climates. However, it doesn’t stand confinement well and is predisposed to feather eating. An excellent traditional cross is an Andalusian male over Langshans females. This produces a hardy brown egg layer that matures early.

The Blue Andalusian chicken was recognized by the American Poultry Association as a standard breed in 1874. Males weigh 7 pounds and females weigh 5.5 pounds.

Andalusians are small, active birds which can be rather noisy and although they are still quieter than many of the Mediterranean breeds, the noise factor may need consideration. The hens lay early at around 5 or 6 months of age but they don’t go broody often so aren’t natural sitters. Chicks are hardy and mature early and they make excellent backyard birds although they can be rather flighty so make sure that your boundaries are sound and high! They are calm birds and the males don’t usually fight with each other but they don’t like to be overcrowded so provide them with plenty of space to avoid problems with bullying. They don’t really enjoy human contact and prefer free ranging to confinement as they are good foragers and economical feeders.

They are hardy but their combs can suffer from frostbite so care should be taken when temperatures plummet and exposure to a lot of sun can fade their plumage so positioning their runs in the shade is a good idea. They are layers of large white eggs and will produce somewhere in the region of 160 eggs per year, continuing to lay during the winter months. Cocks weigh an average 7lbs while the hens are 5½lbs. 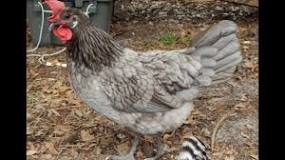 They need space. And they can get aggressive without it. So, make sure you have free-range conditions or a very large backyard before you order these delightful birds. But there’s a lot more you should know about Blue Andalusian chickens before committing to them.

Be the first to review “Andalusian Chickens” Cancel reply